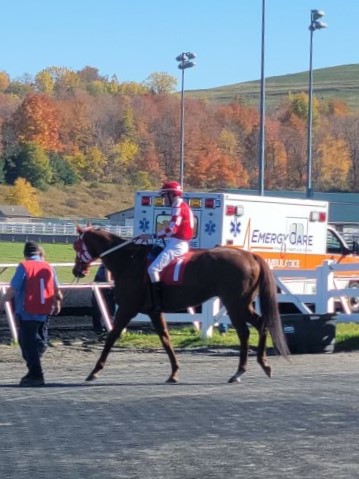 Stevis Man retired sound and health from and impressive flat racing career in October 2022. He made $437,208, making 74 starts and winning 26 races, finishing second in 8 and third in 8 races. You can find his racing record here. He retired sound, happy and healthy.

Stevie as he is now being called, began his race career at the age of 3 years old. He changed hands six times through the claim box, racing at 7 different tracks, Mountaineer, Turfway Park, Oaklawn, Keeneland, Horseshoe Indianapolis, Gulf Stream and Presque Isle Downs.

Marlene Murray, founder of the RACE Fund had been tracking him for years, reaching out each time he changed hands to offer him a soft landing upon his eventual and inevitable retirement from racing. It finally happened when JSR Stables retired him in October 2022. Stevis Man finished second in his last race to a standing ovation from his many fans at Presque Isle Downs.

The question now facing Marlene was what to do with this incredible warrior. He had certainly earned his retirement from racing, but what should it look like? Would a horse of his caliber want to live out the rest of his days in sanctuary? Would he want to learn a new career at the age of 12? She reached out to Kimberly Godwin Clark at Thoroughbred Placement Resources for help in finding the answer. After a short lay up period, Stevie arrived at Leighton Farm on November 23, 2022 to a smaller standing ovation.

It was easy to determine Stevie was going to want some kind of job or second career. He was sound, healthy and extremely friendly. He craved attention from us and any visitor he encountered. We would wait for him to settle into the routine at Leighton Farm before starting the retraining process and keep our sessions short and easy to give him a rest, but provide structure which is what he had been used to for most of his life. Whether or not they are a retired racehorse, horses find comfort in a reliable routine. The horse relies on us for everything, so it makes sense he will be more relaxed once he understands his needs will be met when expected.