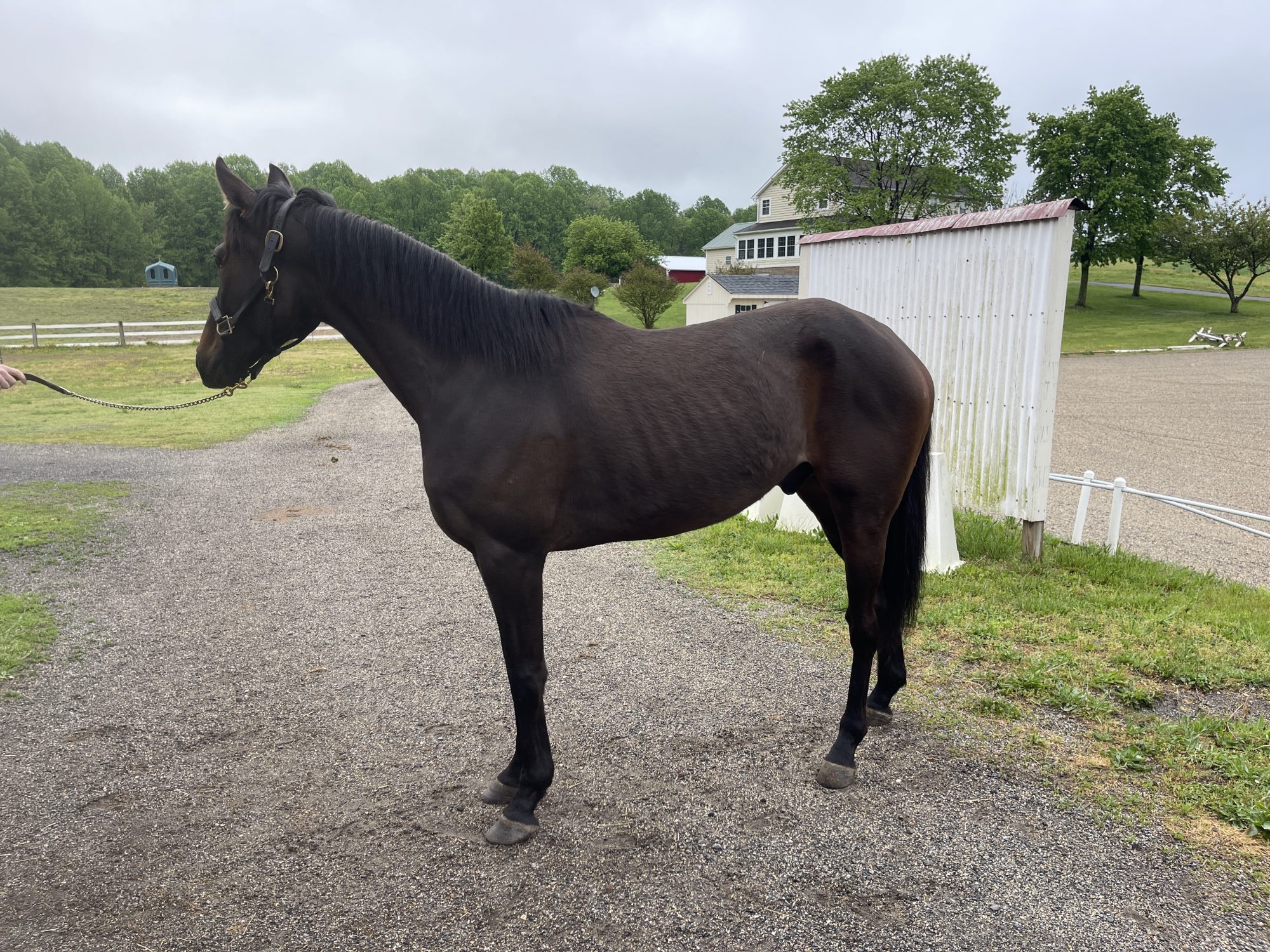 Epigrammatist came to us Saturday, April 30. He had travelled from Maine to Fair Hill, Maryland and then to Leighton Farm in Upper Marlboro, Maryland within the past couple days. “Crush’s” last race was at PARX on September 15, 2021. He had retired from racing shortly after that and was let down and turned out before coming to us to retrain.

In their ongoing effort to support their breeder and owner’s responsibility, St. Patrick’s Racing Stable, LLC and George Kerr Racing had offered a scholarship to help with the cost of prepping and competing Epigrammatist in the Retired Racehorse Training Project. I had submitted an application and was awarded the honor of retraining “Crush.”

Crush had five months of rest on the farm after retiring from racing. He spent the winter at the farm in Maine. We began the fundamental training about one week after his arrival, but we will not be asking a lot of him physically, for now. Our first goals are to establish a time during each day where he expects to be trained and to establish reliable reactions to voice commands and develop and expand his attention span.

Since he’s lost fitness, this period will be followed by about one month of walking to allow his body to adjust to being ridden again and start the building of muscle. Walking will segue into power walking around the farm and the amount of time will incrementally increase as his fitness develops. Power walking is purposeful walking and we’ll cover that in a future post.

The following video is Crush’s first training session at Leighton Farm. Due to his age and loss of fitness, his lunging will be limited to the walk only. Lunging can be very stressful to horses physically. James C. Wofford once stated that 20 minutes of lunging is equal to 40 minutes of riding. I have always subscribed to this philosophy. It’s not easy to ride a horse on a perfect circle. Normally only upper-level riders can consistently do this. It is fairly easy to lunge a horse on a perfect circle. A perfect circle challenges the horse physically because he doesn’t get a break from using his inside hind, topline and abdomen by going straight on a part of the circle.

He is led into the grooming stall with the chain over his nose to bring up its use inside and outside of racing. There are many who do not like the use of the chain shank in handling horses, but this is something all racehorses understand. It is also a good way to keep control of an excited horse. I put a chain over the nose of my dressage horses when exploring a new show venue. Loose horses are in danger and this method is very effective for maintaining control. It’s not always necessary though and over the years I have transitioned to simply tugging on a regular lead rope which in turn mimics similar pressure and often a similar response from a horse. I also use a simple cloth lunge line without a chain for most lunging after the introductory period. I will make a post about the use of the chain over the nose in a future post.