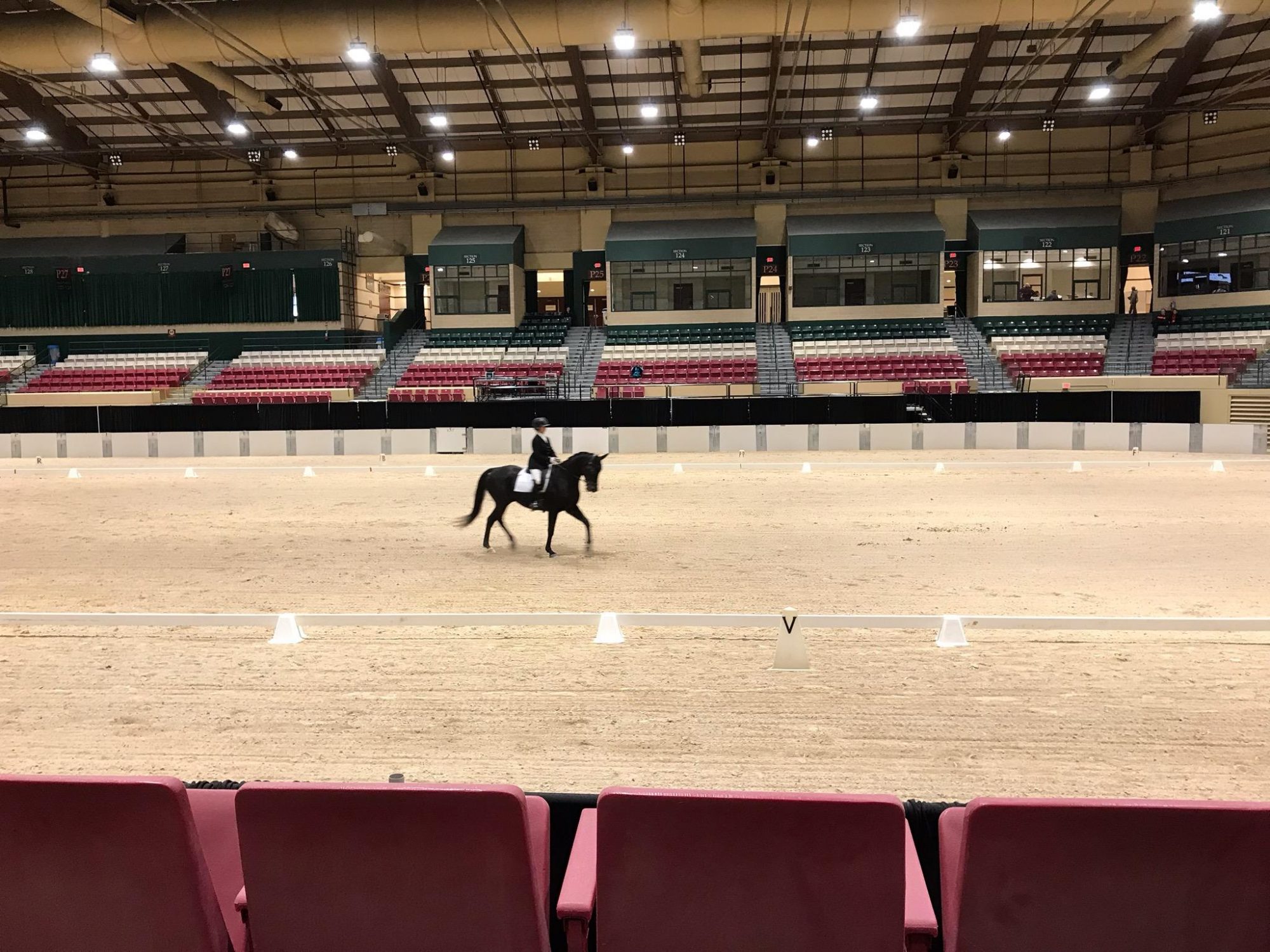 At the age of four and a half, a barely broke, nearly black Thoroughbred gelding came into our lives at TPR. Spooky, too big for his britches, and a cribber to boot, Mystical Harbor was what most horse people would label as a “handful”, to put it mildly.

“Fellow”, as we call him around the barn, was bred to race but un-started until his four year old year. The gelding was big, strong, and highly reactive. Not a good combination. But we believe there are positives in most horses. Instead of a reactive horse who would require hours of painstaking work, TPR executive director Kimberly Clark saw big, lofty gaits and a bigger personality under that tough exterior.

Now, Fellow has become a TPR ambassador, embodying everything we believe about Thoroughbred horses. We believe that Thoroughbred aftercare, after the races, does not have to automatically equate with “rescue”.

Instead, we believe that with proper time and energy, these freakishly talented, versatile horses can be retrained into meaningful careers. Fellow is living proof of that — the un-rideable four year old has become an upper level dressage horse in the making.

At TPR, our primary goal is to increase demand, particularly among top riders, for retired racehorses by continually demonstrating the athleticism and versatility of the breed. “These horses are bred to perform,” Clark says. “There is a retired racer for most any purpose, from trail riding to elite competition.”

Of course, this repurposing of the ex-racehorse is not an overnight process. It takes years of personal time and financial investment along with correct training and patience to “make” a Thoroughbred. And this can be difficult for professional riders and trainers to take on — the expense alone can be staggering.

In many cases, Thoroughbreds are passed from home to home without proper training, slipping through the cracks and becoming rescue cases.

In the past, Thoroughbreds were the dominant breed in equestrian sport. Hunting, jumping, eventing — the breed enjoyed prominence for decades, before the influx of the heavier warmblood breeds and the favor towards them. Thoroughbreds such as Bally Cor, Jet Run, and Touch of Class enjoyed Olympic success. But today, media outlets run special stories on the Thoroughbreds competing at the top levels of sport because it is so rare.

That’s why we’re out to set an example with Fellow, or Mystical Harbor. Kimberly and Fellow have forged a partnership, a bond, that will continue to grow as they work towards their goal of competing at the Grand Prix level of dressage.

Mystical Harbor is just one example of the development of an elite athlete through training and patient handling. Remember, Fellow was far from mellow when he first came to us! It takes time to bring out the positives we pride ourselves on seeing in these horses.

In just five years, Fellow has reached the Prix St. GeorgeLevel of dressage, earning scores necessary for Clark to earn both a USDF Bronze and Silver Medal. Prix St. George is entry to International Level Dressage and most horses never get this far — but not Fellow. He is just starting to realize his potential, and the sky is the limit. In a sport in which Thoroughbreds are a true rarity at the higher levels, he is a true ambassador for his breed.

Our goal with Mystical Harbor is to reach the Grand Prix level. As we continue to progress, we want to continue to bring more attention to this versatile, elite breed. We are seeking supporters of our journey to the Grand Prix ring. Fellow can do it, but not without your help.

Ready to get involved?  Contact us to become a part of this incredible team, and in the process you’ll help make a difference for Thoroughbreds everywhere. You’ll receive updates about his training and competition schedule.