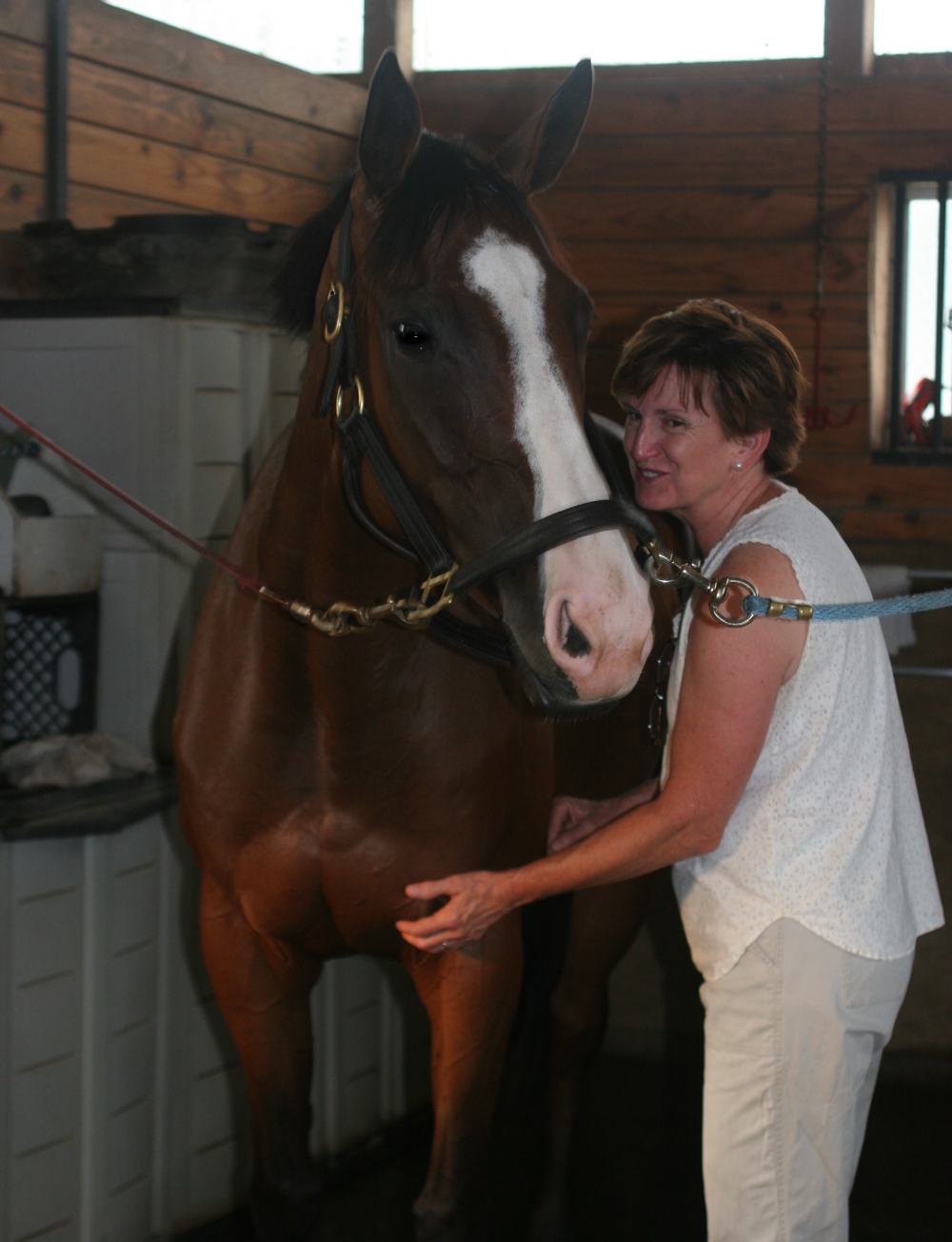 How consistent are you while working with your horse? Do you do things the same way each time you work with him? If you use a word or phrase as a command or and aid while riding, do you follow through and ensure the horse has responded to it or do you sometimes let it go?

It’s not magic and it’s also not simply because each and every one of them is a good horse. The reason is, I am consistent. When I put a horse on cross ties, each and every time he moves a hoof, even a half inch, I move the hoof back to the original position and I say “Ho”. I don’t get mad or frustrated or make a big deal of it. I simply move it back to the original position, every time, not most of the time. There are no exceptions because if I don’t remain consistent and allow it every so often, I am in effect giving the horse permission to move around on the cross ties. Not just half an inch either, as much as he wants because horses cannot connect the dots. They do not have the ability to realize that most of the time, means all of the time. If I correct any movement of the horse while on the cross ties every single time I am showing the horse what I expect of him in a clear and concise way that he can understand and it will translate to out and about and even at the mounting block when I ask him to stand and say “Ho.”

Now I will admit that in the beginning, this is tedious work. I may have to correct the horse every few moments in the first days of his training on the cross ties, but if I am consistent, it doesn’t take long for him to understand. He must stand quietly as I groom him, pick his feet and when I put his tack on. In these early days I may have to refrain from putting the saddle on several times to make a correction because the horse moved. What I don’t want to do is put the saddle on while the horse is moving because then I will have given the horse permission to move when being saddled. I always keep the first training sessions on the cross ties very short so I don’t agitate the horse. If he loses his ability to stay focused on me, the session will not be successful. However, if I stick to my training, it won’t be long before the horse is able to stand quietly which brings with it a plethora of advantages. One of the most important being we begin our work together for the day in a relaxed manner. Ever notice that horses that have the ability to stand are relaxed?

When I ride, I am as consistent as is possible. I put my leg on and if the horse doesn’t respond, I touch with the whip every single time. With more advanced horses, I may only have to make such a correction once a month, but it must be understood that if I don’t follow through, I will be giving the horse permission to ignore my leg. What I’m trying to illustrate here is that the consistency in my relationship with the horse is in perpetuity. There will always be moments when the horse moves just a wee bit on the cross ties and I will have to take the time to move him back or suffer the consequences of not doing so. There will always be occasions, albeit rare, when my upper level dressage horse doesn’t promptly move off my leg and if left unanswered, he will understand that it is okay to ignore my leg. If I don’t correct it and the behavior increases, which it is bound to do, and then I suddenly decide he’s got to listen to said leg aid, well then I am being unfair when I correct him because I said it was okay to ignore my leg. I need to make up my mind of what I want and follow through or I will be confusing the horse or worse yet, he will learn that I don’t say what I mean or mean what I say.

Horses learn rather quickly when you are consistent as long as you are asking them to do something they are capable of. You’ve also got to be clear. Clear in a way they can digest, not clear in a way you understand, but maybe the horse does not. When using voice commands, you’ve got to follow through with the meaning each and every time. I believe that “Ho” or “Whoa” is one of the most abused words we use around horses. How many times have you seen someone say “Ho” to a horse and then allowed the horse to keep moving as they say it again and again? They have managed to teach the horse that the meaning of “Ho” is do whatever you want. We often have horses arrive at the farm that have learned that “Ho” means nothing, but it doesn’t take long for them to understand, we mean stand quietly.

There are many benefits to being consistent. Horses tend to learn things faster. They are normally calmer because they know what is expected and they aren’t corrected for deviations in behavior they didn’t cause. If you are consistent in all your practices such as feeding at the same time every day, this will also cause them to be more relaxed.

Consistency can work against us if we are not paying attention. Frightened riders are consistent in their reactions making them excellent trainers. Most often, they don’t realize they are training the horse. Tensing their body is negative reinforcement for the horse. It is a punishment because it makes the horse uncomfortable as it restricts his movement. Therefore, it is an aid that they are not even aware they are giving. Let’s examine a common situation to see what I am talking about. A rider is introducing a horse to the indoor for the first time. There are a couple other horses already working in the indoor. This makes the rider a little up tight because they aren’t sure what their horse is going to do. As the first horse approaches them, they feel their horse’s body slightly tense up. He is a little more on alert because he’s in a new environment and the other horse is passing closer than he would be at the track or even in an outdoor ring. The rider tenses up even more as the horse passes by, shortening her reins so she will be ready should her horse react. They survive but as the next horse approaches, she tightens up even more because she now knows her horse doesn’t like other horses coming at him. Her horse responds in kind and this time he even jigs a little as the horse passes by him. As the third horse approaches, her horse tries to turn around, she pulls the reins, in an effort to regain control and he finally stops in the middle of the arena, if they are lucky. It doesn’t take long before that horse doesn’t want other horses near him. His rider leaves the arena believing he doesn’t like horses around him. That isn’t what just happened though. Her horse doesn’t want other horses near him because because he gets punished every single time a horse gets near him and that amounts to consistent training. This may seem like an exaggerated scenario but I’ve seen it happen more times than I care to count.